A collision of (he)art and technology

In 2019, the Flemish Audiovisual Fund organized Storycon for the first time. With a break of 2 years, for well-known reasons, Storycon was organized again this year in the beautiful Bozar.

Storycon’s tagline was ‘A collision of (he)art and technology’.
Storycon is a conference that focuses on the craft of storytelling in various media forms such as movies, TV, AR/VR/XR and video games.
The aim of the conference is to inspire audiovisual professionals to reflect on the art of storytelling and explore different media to express their ideas. This edition was tasked with exploring how creators can harness the power of technological advancements to create stories that resonate more strongly than ever before.

It was striking throughout the conference how little specific attention was paid to the technology part of XR. The technical aspect was already taken for granted by the various makers, with great respect for the possibilities and its complexity.

Kent Bye comes in many guises and is best known as a journalist and podcast maker of ‘The Voice of VR’. In that series he interviewed more than 1000 guests about their idea of VR. His approach is not limited to the narrow technological aspect. He gathers a very broad and apparently unrelated list of topics and guests. 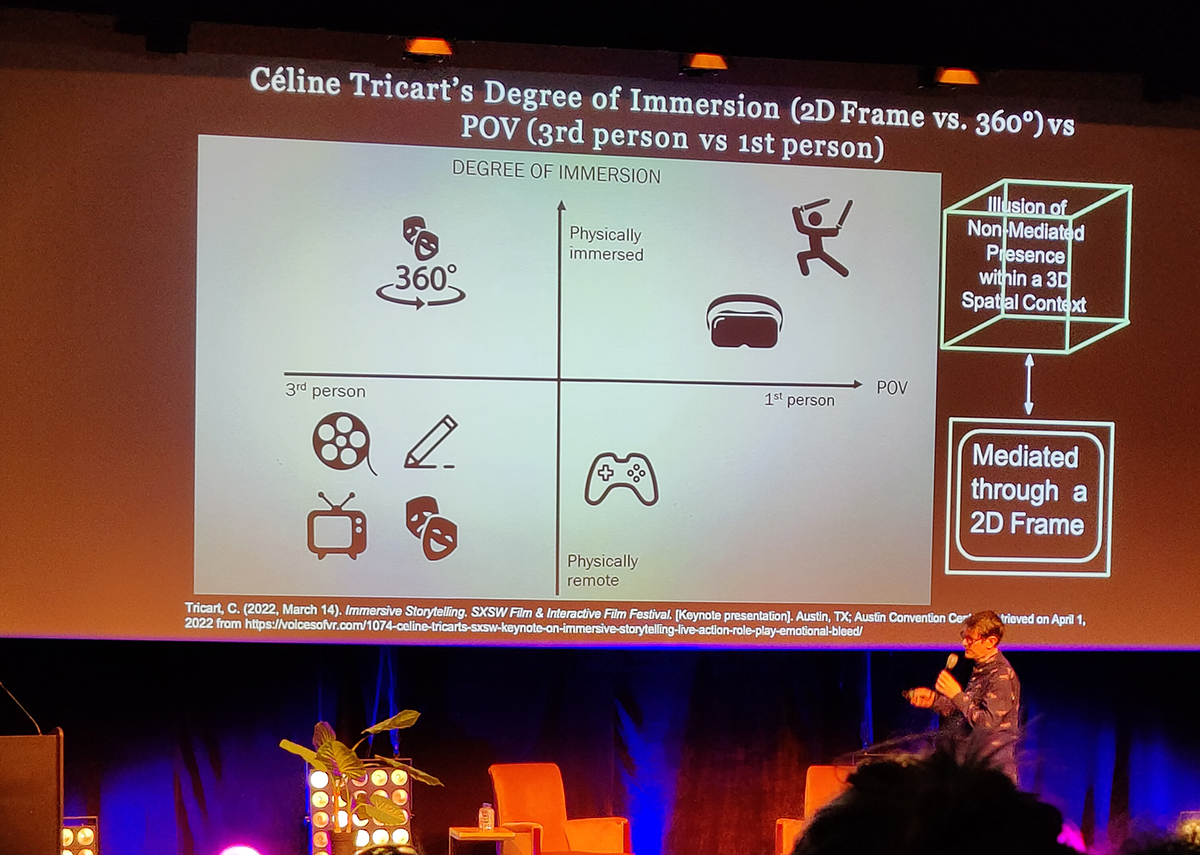 It’s his way of analyzing universal thinking and summarizing it into useful frameworks that inspire makers in the industry.
He explained the research and insights of his ‘Immersive Storytelling & Experiential Design Framework’ at a fast pace. Fortunately, the slides of his keynote are available online.
The basic idea is based on 3 major elements:

From the mindset of consciousness he returns to Jung’s universal archetypes “Intuition, Feeling, Thinking and Awareness”, which arise from the four elements earth, water, fire and air.

Starting from this idea, he builds his framework. He argues for example that the context in which the ‘user’ finds itself, the quality of the experience (through technology and involvement) ultimately leads to who we really are in the story. In other words, according to Kent, makers have the task to think about the character that arises from the different building blocks. He cites the five personality traits as a guideline at the start of the exercise with the question ‘who do we really want to be’.

Link to the presentation.

Luis Antonio is an Independent Game Developer. He built an impressive career path from 3D Artist at Rockstar Games to Art Director at Ubisoft. One day he had the idea of developing Twelve Minutes.
He took his idea to the big game studios but nobody really believed in it. Convinced of his idea, he persevered.
It became an impressive game for which he managed to convince William Dafoe, James McAvoy, and Daisy Ridley as the top cast.
The game is an interactive story and begins with a romantic evening between a couple. Suddenly, the police invade and accuse the woman of murder. Before you know it you are back at the beginning of the evening and there the game begins, with the assignment to understand what is really going on.
Luis Antonio elaborated on the complexity of the different ‘story branches’ and the challenge of working with the actors on this. Facial expressions are rarely shown in the game. The voices and literal tone of voice evolve throughout the game and play an important role in giving cues to the players.

Time plays a big role in this game, if only because the title gives a time indication. As a player, you are the director of a linear story. Makers can’t plot this story in a classic timeline and looking for ways to visualize everything well for both the recording and the testing afterward. The basis of those exercises was a log file of every action a player can perform or performed during gameplay.

Link to the Twelve Minutes trailer.

Margaux Missika is a producer at the French production house Upian. Among other titles, she worked on Les Idées Larges, a documentary for Arte where journalist Laura Raim discusses the major themes of life with philosophers, scientists, professionals, … . The series is intended for online publication. One of the insights from the series is the importance of a credible person and the correct setting when telling a story.

They also made FAQs for Arte. FAQ is a series in which ‘frequently asked life questions’ were addressed by specialists or experts and streamed on Twitch. The pandemic and accompanying lockdowns forced them to rethink the concept. They left the studio and called people in their home environment. The short videos were published on Tik Tok and Instagram, among others. Instead of polished quotes and binding texts, the makers chose existing Gif animations. That style was very much in line with the current way of communicating at that time and what we are still used to today. That contributed a lot to the recognizability of the videos.
One of the insights that Margaux shared about this was how algorithms of the online platforms are influencing format and even content. Viewing figures have been replaced by likes, shares, and interaction measurements that an algorithm works with. The higher the recognisability, the greater the interaction. Concepts such as A/B testing, continuous monitoring of what happens after publication, and permanent adjustment based on insights into use are the message.
During the same period, the people of Upian wanted to develop something for themselves in the freed-up time. Averse to roles in the organization, they brainstormed and developed an escape game. It became a popular title and they decided to produce it as a public game.
Anyone who wants to can still play the game pyramiden.fr. It is a web-based escape game using only real images from the ghost town of Pyramiden and is intended for a group of up to 6 players. It sounds like an interesting team-building activity to learn how to collaborate online.

Her message here was that innovation rarely starts in intended brainstorming sessions. This product was created because people were given the freedom to think and work outside their existing framework.

Venice VR is an online and live exhibition in the context of the Venice Biennale. The curator of the exhibition is Liz Rosenthal.

Link to the Venice VR biennale. 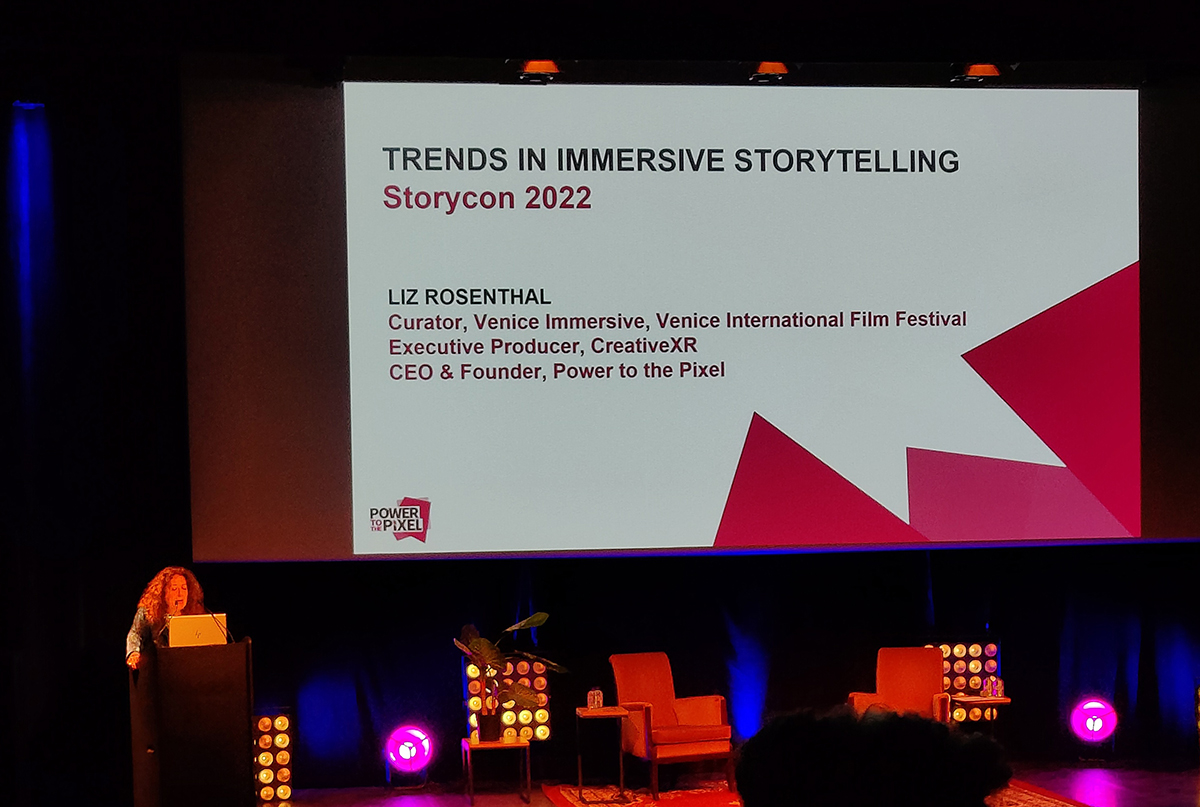 VR in museums is quite well known. Liz goes further than the classic VR in her assignment and also looks at festivals and social platforms, … The list of examples she brought with her is too large to mention. We were taken to an exhibition where all forms of XR were discussed and attracted attention.
Of course, she knew XR before the pandemic but sitting at home a lot sparked her curiosity after which she bought VR glasses and went exploring. She shared the impressive growth of VR glasses bought and accounts connected. By the end of 2022, it is expected that 16.8 million VR units will have been sold worldwide, the majority of which are standalone devices.

Creative thinker and entrepreneur, Antoine Cayrol is equally good at both. He is the founder of Atlas V, a studio that creates immersive experiences.

‘How does funding for such projects work’ was one of the interesting questions from the audience. The genre is not a game, but neither is it a classic movie. Creativity and persuasiveness are therefore recommended, Antoine says, to convince people who are usually less familiar with this new genre.

He explains that it is very useful to have a solid prototype when looking for funding. The unknown makes unloved in this case. Investors who are not familiar with this genre do not yet see the possibilities of how this could work. A prototype here is the catalyst and serves the purpose of funding.

Life is Strange – True colors is the title Deck Nine gave to the sequel to the earlier versions in the series that were not made by them.
‘An emotional rollercoaster’ is the tagline of the game. Jonathan Zimmerman is Narrative Director at Deck Nine Games and this narrative game 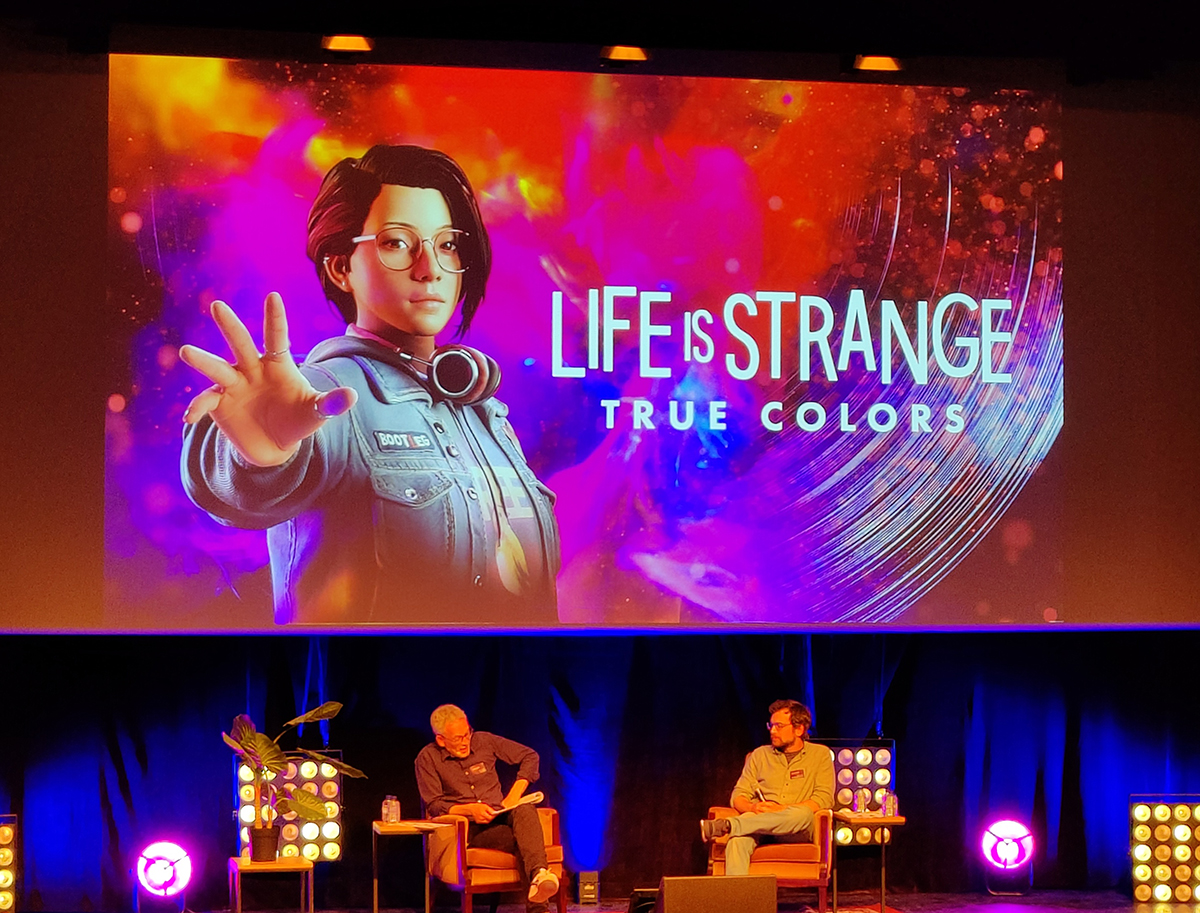 In the game, you take on the role of the main character who feels the emotions of others in her environment and understands where those emotions come from. With this gift, you embark on the story to unravel the mysteries of the town of Heaven Springs.
The game is mentioned in many reviews as one of the most immersive games because of its emotional involvement.
In this game, you make conscious choices and you can influence the storyline. The game can end in different ways depending on the choices you make.
The definition of ‘Presence’ that arises when you as a person feel addressed on many levels is clearly visible here.

This way to the trailer
Game review: click here

There are many interesting insights to share from this conference. The overall insight is the change of the viewer’s role. Being a spectator and evolving into a participant. The degree of involvement increases the sense of presence. This presence is best achieved when there is a good balance between people, story and technology. Understanding the context, the role, and how people feel in the story are new here.

It’s a balance that we think about and applies in the same way at Xylos. We call it ‘the Xylos triangle’. 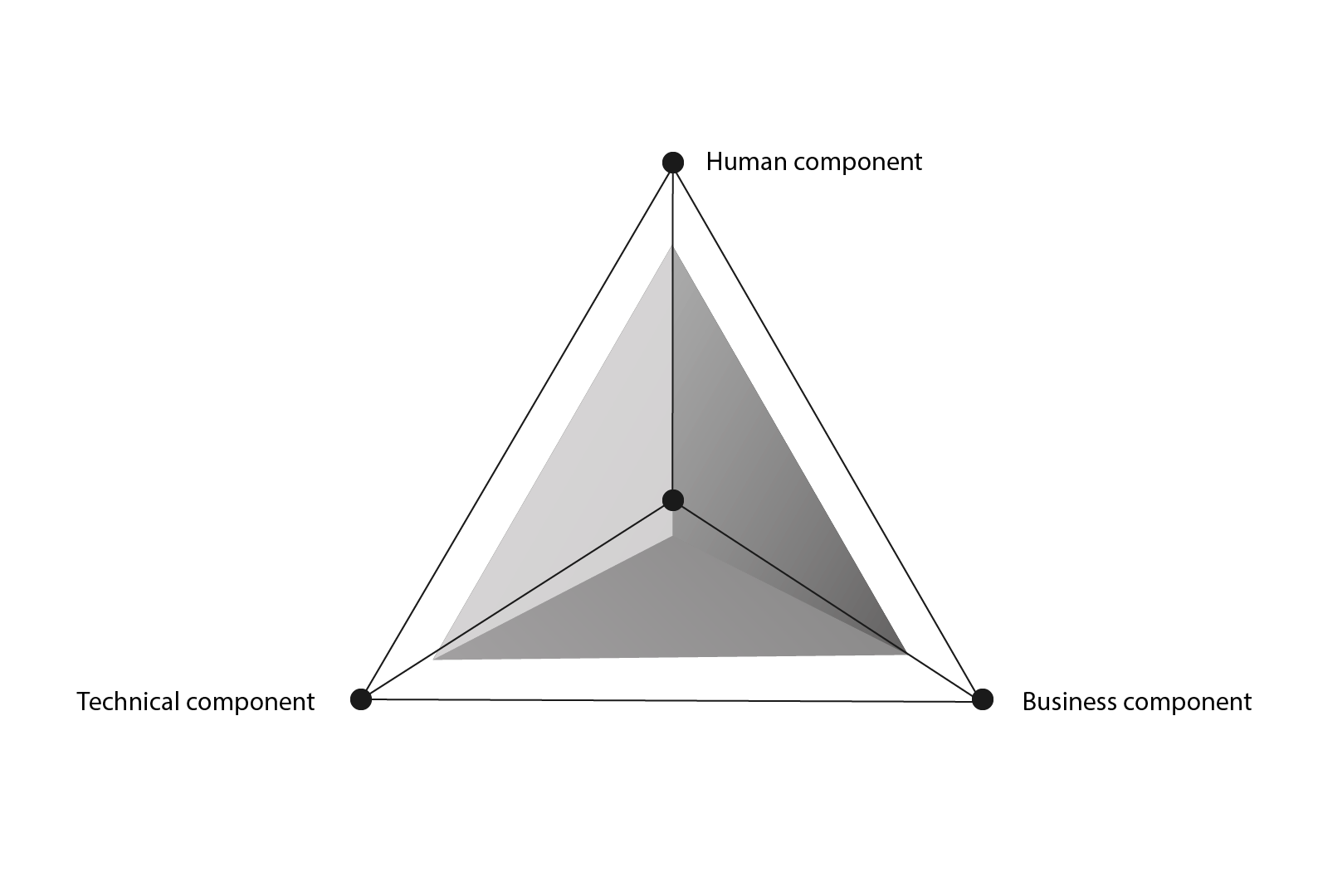 Technology has no right to exist without the need to contribute to the people who work with it. People will only use the technology when they are fully involved. This involvement is created by the storyline or strategy that we develop together with our customers.

The same applies here, the story only makes sense if it can be filled in technologically and if it contributes to the people who work with it.

The customer is no longer a spectator. At Xylos, we take all elements equally seriously and work together with our customers in everything we do. 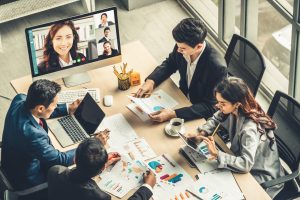 2 meeting habits we should unlearn post-COVID 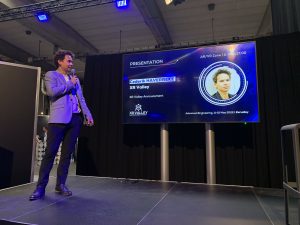